Posted on January 21, 2008 by Mike Pihlman Leave a comment 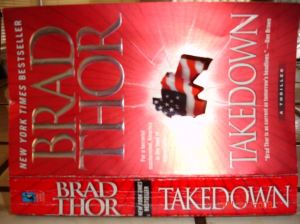 Sit in your favorite chair to read Takedown. But, before you start, strap on a seatbelt and pull it tight, because the next time you will be able to relax is after the very last word in the book: dead.

“Takedown” is a rousing, violent, epic adventure filled with all the excitement a Thriller reader expects….and more.

As “Takedown” begins, al-Qaeda master bombmaker, Mohammed bin Mohammed (M&M) is taken into custody, and held in New York City, by black suited special agents of the United States. The loss of M&M to al-Qaeda’s future plans is devastating and they want him back.

Al-Qaeda sends Abdul Ali to meet with a person with access to information second only to the most advanced intelligence agencies, The Troll, to ask for help planning an attack on New York City to get M&M back.

We first meet up with our hero, Scot Harvath – ex-Navy SEAL and now special agent for Homeland Securities Office of International Investigative Assistance aka the Apex Project- in Canada taking another suspected al-Qaeda bombmaker, Sayed Jamal, into custody.

After successfully completing this task, Scot travels to New York City to visit an old friend, Bob Herrington, an ex-Ranger just back from Afghanistan who is undergoing treatment for injuries sustained while there.Meeting in a bar, they watch the news on TV and decide that something is happening that no one quite realizes yet.They leave the bar, which is in Times Square, and head to the VA Hospital.

But before they get there all heck breaks loose.

Several bridges and tunnels are blown up killing thousands and effectively isolating NYC from the world. Helicopters and boats are shot down or sunk so no reinforcements can come in.

It turns out, Abdul Ali and an elite force of Chechen special forces have started implementing The Trolls brilliant plan to recover M&M.The plan includes entering each of the 5 top secret U.S. Government intelligence gathering locations to find M&M starting with the least heavily fortified and progressing one by one to the most difficult.Unbeknownst to Ali who is simply looking for M&M, the Chechen leader, working with The Troll, are also stealing U.S. intelligence as they make their way through the locations.

With Manhattan sealed off from the world the task of finding and stopping the terrorists falls on Scot, Bob, and three of Bob’s VA hospital buddies all of whom are ex-military special operations.

The action proceeds at rip roaring speed as Scot and his band of military special ops people chase the terrorists through the streets of New York.The cost is high for the U.S., for Scott, and for the band of ragtag hero’s.

The ending to “Takedown” is one of the best (most shocking and surprising) I have ever read.You will have to read it to see what I mean.

I have read all of Brad Thor’s books but had gotten a bit behind.I am now almost caught up and am looking forward to reading how the story continues in “The First Commandment”.

If you want to start this series read “The Lions of Lucerne” a tremendous book filled with plenty of action and vivid details of Switzerland.

Here is a video clip of Brad Thor being interviewed by FOX News about “Takedown”: 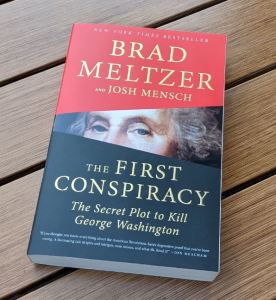