“Playing for Pizza” by John Grisham 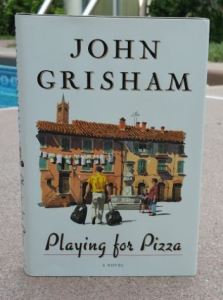 Every now and then John Grisham writes a book that is “off-genre”. “Playing for Pizza” is one such novel, and it is a gem. Other off-genre (meaning not a Legal Thriller) John Grisham fiction books are: “A Painted House”, “Skipping Christmas”, and “Bleachers”. All of them are outstanding. Yeah, I’ve read all of his books minus one “The Appeal” which I have in the queue.

I suspect if you do not like football, “Playing for Pizza” may get a little tedious, but, if you do like it the game details are a lot of fun. If you enjoy getting away to another land and culture you will definitely enjoy “Playing for Pizza” as the reader is taken away to the one country I would love to move to to live out my remaining years….Italy.

Rick Dockery is a third string quarterback for the Cleveland Browns (and many other teams before this one). It is the playoffs and the first and second string quarterbacks both are out of the game. Rick comes in with the Browns leading with only 11 minutes to play. He promptly blows the game, and gets knocked out cold with his third major concussion. He wakes up the next day, in the hospital, to a Cleveland that hates him and calls him the all time “Goat” leader in football. The Browns release Rick. Arnie, Rick’s agent, tries to call other teams to find Rick his latest third string quarterback gig but, big surprise here, no one wants him.

Ricks football career may be, thankfully, over.

But Arnie is resourceful, finding Rick a starting quarterback position for $20,000 a year (American) playing for the Parma Panthers in Italy. Rick is hesitant to go, but, eventually his love of football (and promise of beautiful cheerleaders) overrules and he heads to Parma, Italy.

The teams in NFL Italy are allowed three Americans per team. The Panthers coach, American Sam Russo (from Bucknell), has been in Italy coaching the Panthers for the past 5 years. He has an Italian wife and has a part time job showing Americans around Italy. It turns out that the Parma Panthers do not pay their Italian players, they all work full-time and play “americano football” for the sheer love of the game. Although they are not the best players in the world, they are tough as nails and truly enjoy playing.

As Rick adjusts to the culture, the reader is taken on a tour of Italy. We are introduced to the food, the pace of life, the enjoyment of good food and drink, the beauty and history of Italy and the love of opera.

I want to live there…did I say that already?

Rick meets the most wonderful characters. From Sam his American coach, to Franco his fullback and local judge, to Nino his center and “Café Montana” owner (yes, it is named after my beloved San Francisco 49’ers greatest quarterback ever, Joe Montana).

Rick finds that he likes opera and meets Gabriella the lead Soprano singing “Otello” at the Teatro Regio opera house. Although that relationship does not work out, he eventually meets Livvy Galloway a very lively American college junior who is in Italy for year of study. Livvy loves Italy and knows the details of it’s history, architecture, and culture. She enthusiastically drags Rick on tours of castles, churches, wineries, restaurants, and the country side where Rick would have never gone by himself. His appreciation and love of Italy increases even though he hardly realizes it.

Of course the Parma Panthers football is the main focus of the book. As the team goes through the NFL Italy season we follow them through the ups and downs of winning and losing. They have high hopes to get into the NFL Italy Super Bowl now that they have a real NFL quarterback as their leader. They party hard and love and hate with vigor.

This book is such a delight I wish it were longer than just 258 hard cover pages.

Italy intrigues me, I would love to live there….hmmm, have I said that already?

“Fire and Vengeance” by Robert McCaw