Since I am still having a hard time concentrating (but getting better… if you don’t already know, see why:  http://ForCarol.com).

I took the liberty of copying this list of the top Hardcover Fiction bestsellers of the week of October 14, from the good folks at NPR.   Hope they don’t mind.

Go here for the entire contents of the NPR page….

Weeks on list: 6  •  In Freedom, author Jonathan Franzen — of 2001′sThe Corrections — zeroes in on the vicissitudes of an unhappy, white, middle-American family and highlights the problems of today’s American culture. At once domestic and political, Freedom both narrowly focuses on a lopsided love triangle — between Patty and Walter Berglund and Walter’s lifelong competitor/best friend, alt-rock star Richard Katz — and more broadly examines the stresses of our post-Sept. 11 world.

Weeks on list: 2  •  Humorist and personal essayist David Sedaris takes on selfishness, bigotry, righteousness, loneliness and other all-too-human foibles in 16 animal fables, including one in which a selfish cow insists on being partnered with the turkey for Secret Santa because she knows he’ll be gone by Thanksgiving.

Weeks on list: 2  •  Ken Follett, of World Without End, spotlights five families — American, German, Russian, English and Welsh — as they move through the world-shaking dramas of World War I and the Russian Revolution. Fall of Giants is the first installment of a trilogy that will cover the 20th century and tackle subjects like class, warfare and women’s suffrage.

4. The Girl Who Kicked the Hornet’s Nest

Weeks on list: 20  •  The final book in Stieg Larsson’s Millennium Trilogy opens with Lisbeth Salander — the heart of his two previous novels — in critical condition, a bullet wound to her head, in the intensive care unit of a Swedish city hospital. She’s fighting for her life in more ways than one: If and when she recovers, she’ll be taken back to Stockholm to stand trial for three murders. With the help of her friend, journalist Mikael Blomkvist, she will have to not only prove her innocence, but also identify and denounce those in authority who have allowed the vulnerable, like herself, to suffer abuse and violence. And, on her own, she will plot revenge — against the man who tried to kill her, and against the corrupt government institutions that very nearly destroyed her life.

Weeks on list: 1  •  Best-selling crime novelist Michael Connelly returns to Los Angeles’ seedy underworld in the latest adventures of LAPD Detective Harry Bosch. After 24 years in prison, convicted killer Jason Jessup has been exonerated by new DNA evidence. Defense attorney Mickey Haller is convinced Jessup is guilty, and agrees to change sides and prosecute the suspected killer on the condition that Bosch work with him. With the odds and the evidence against them, Bosch and Haller must nail a sadistic killer once and for all.

Weeks on list: 5  •  To 5-year-old Jack, Room is the entire world. It is where he was born and grew up; it’s where he lives with his Ma as they learn and read and eat and sleep and play. At night, his Ma shuts him safely in the wardrobe, where he is meant to be asleep when Old Nick visits. Room is home to Jack, but to Ma, it is the prison where Old Nick has held her captive for seven years. Through determination, ingenuity, and fierce motherly love, Ma has created a life for Jack. But she knows it’s not enough — not for her or for him. She devises a bold escape plan, one that relies on her young son’s bravery and a lot of luck. What she does not realize is just how unprepared she is for the plan to actually work.

Weeks on list: 87  •  Told from three different points of view, The Helptakes place in Jackson, Miss., in the early 1960s, when the Deep South was beginning its immersion into the civil rights movement. Kathryn Stockett captures both black and white voices, and all three main characters — renegade debutante Eugenia “Skeeter” Phelan, and housekeepers Aibileen Clark and Minny Jackson — are complex, admirable women.

By Robert B. Parker

Weeks on list: 1  •  In Robert B. Parker’s 38th and final Spenser novel — the award-winning writer died earlier this year — the iconic Boston PI agrees to protect art historian Ashton Prince during the cash exchange for a rare painting that has been held for ransom. When a bomb kills Prince during the botched exchange, Spenser plans to even the score. But his probing into the painting’s complex history elicits some violent reactions.

Weeks on list: 4  •  Safe Haven — best-selling author Nicholas Sparks’ 16th novel — is part love story, part thriller. The young, beautiful and vehemently guarded Katie is a mystery that the close-knit community of Southport, N.C., very much wants to solve, and as Katie finds herself drawn to two locals, she is forced to reconsider how much longer she can let her dark past stand in the way of her future.

Weeks on list: 1  •  Renowned for his literary exploration of Jewish and American identities, Philip Roth — author of Goodbye Columbus, Portnoy’s Complaintand American Pastoral — returns to familiar ground in his 31st novel, Nemesis. Set in Roth’s hometown, Newark, N.J., during the steamy summer of 1944, Nemesisconcerns a polio epidemic that flares up in the city’s Jewish Weequahic section.

Weeks on list: 2  •  With flourishing careers in the arts, a spacious loft and lively friends, it seems SoHo couple Peter and Rebecca Harris have every reason to be happy. But when Rebecca’s 23-year-old brother comes to visit, the former drug addict and Yale dropout burdens the family with his wayward ways and disrupts the contentment they have worked so hard to construct. Pulitzer Prize-winning author Michael Cunningham brings us By Nightfall.

Weeks on list: 3  •  Israeli author David Grossman comments on the difficulties of daily life in Israel in To the End of the Land. When Ora’s son, Ofer, must fight in a major Israeli offensive after having been on the verge of release from army service, Ora — terrified that her son will not survive — goes hiking in the Galilee to avoid “notifiers” that could bring tragic news. With her is Avram, an old army friend who became a recluse after being tortured during the Yom Kippur War. As they trek, Ora tells Avram the story of her motherhood — a retelling that keeps Ofer very much alive for Ora and opens Avram to the intimacy he’d forgotten in his broken world.

Weeks on list: 5  •  New York Times best-selling author Sara Gruen tells the story of six bonobo apes who are versed in sign language and far better equipped to take on the human world than their introverted caretaker, scientist Isabel Duncan. But when an explosion rocks the lab, the apes go missing, only to reappear as the stars of a reality TV show. Now, Isabel must connect with her own kind to save her family of apes from this parody of human life.

Weeks on list: 4  •  From the best-selling author of Sarah’s Key, A Secret Kept delves into the complexity of family relationships and the power of the past to alter the present. Antoine has decided to take his sister, Melanie, to France’s Noirmoutier Island for her 40th birthday, where both spent their childhood summers until their mother’s death more than 30 years ago. Their visit evokes many childhood memories but when a particularly disturbing one grasps Melanie on their drive back to Paris, both siblings are forced to confront a dark truth about their mother.

Weeks on list: 1  •  Nicole Krauss’ Great House follows the war-torn lives of four isolated narrators, connected to each other by a massive antique desk that has passed through various homes ever since it was separated from its original owner in the Holocaust. Like her celebrated best-seller,The History of Love, Krauss’ new novel contemplates love, loss and the oppressive weight of memory on those left behind. The novel was recently nominated for the National Book Award.

“The Snowman” by Jo Nesbo 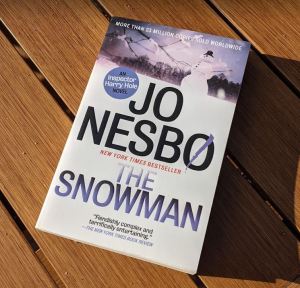