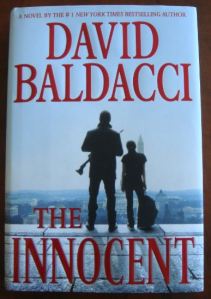 Will Robie is an assassin.  He kills when the Gov’t tells him to kill, except this one time.

Now Robie is on the run from the very people who hired him.  He needs to find out who sanctioned his demise before he…..well……dies.

Along the way Robie meets up with a spunky fourteen year old (Julie) who is also on the run.  She watched her family murdered and the murderer is now after her.

What Robie and Julie ultimately uncover is grander in scale than anything anyone could have imagined.   Robie is the only person who can stop it.

“The Innocent” is another terrific David Baldacci book and a great start to a new series starring Will Robie.

One thought on “Book Review: “The Innocent” by David Baldacci”