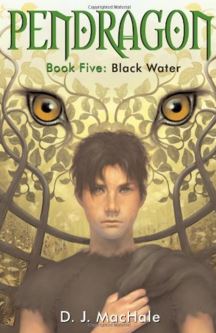 “It’s not good to eat junk food for dinner. It’s not good for your health”.
Mark and Courtney gave each other a sideways look. “I can think of a lot of things bad for your health.” Courtney said. “Burgers aren’t high on the list”.
“Pendragon Black Water” marks a turning point in the Pendragon series. The rules of Traveling have changed, Saint Dane is becoming more powerful, and the story lines have become more intense.
At the end of the last book, Saint Dane left Veelox for Eelong. Gunny followed, and, after his work was complete on Veelox, Bobby flumed his way to Eelong as well. What he found on Eelong was like nothing he ever imagined.
Eelong is both beautiful and dangerous. Flesh eating, very large, lizards roam the ground (luckily they cannot climb) eating the unaware or weak. Eelong is ruled by large cat like beings called klees and they rule over a human population of “animals” called gars.
The turning point on Eelong is now. The populations of both gars and klees are increasing and food is becoming scarce. It is also dangerous to harvest the food without getting eaten by the lizards. Gars do most of the harvesting and are sometimes a tasty treat for a hungry lizard…..yummy.
To stay away from the lizards, the klees have adapted by living high in the trees and in the trees themselves. The trees have bridges between them that act as roads. The menial labor is being completed by the gar. Rather than being grateful for the gars hard work, the klees, for the most part, treat the gars horribly and are about to pass an edict that will allow the hunting and eating of gar so that the klees can survive. The gars cannot catch a break.
And who is behind that decision? Yup…Saint Dane.
But the gar have a secret plan that will change everything. Unfortunately, that plan has been ferreted out by Saint Dane and he has a devised a counter plan that will take down Eelong…..it will take monumental and daring efforts by Bobby, Gunny, Spader, Kasha (the Traveler from Eelong), and acolytes Mark, Courtney, and Boon (the acolyte for Kasha) to try to stop Saint Dane.
Will the Travelers and acolytes do the right thing? Can they do the right thing?
The action in “Pendragon Black Water” is nonstop, tense, and violent. This is a rollicking adventure with unexpected twists and turns that leave the reader breathless. Saint Dane is a master of manipulation and no matter what the Travelers and acolytes do……there is a heavy price to be paid.
Will Eelong be saved? Do the Travelers and acolytes survive? What are the new rules? What is “Black Water?”
As always, you will have to read “Pendragon Black Water” to find out.
After Eelong, Saint Dane heads to Zadaa…..Loor’s home territory.

“The Killer Collective” by Barry Eisler