“Pendragon The Rivers of Zadaa” by D.J. MacHale 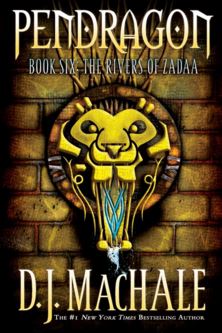 Zadaa has been hit hard by a drought. The Rokador, who live underground and control the rivers and water, and the Batu who live on the surface, grow the food, and protect the Rokador from invaders are close to fighting. Water is scarce, food is scarce, and tensions are high.

Zadaa is at a turning point. And guess who is there to provide a little nudge in the wrong direction? You got it….Saint Dane.

After a somewhat slow, seemingly predictable, start D.J. MacHale revs up his writing engine and finishes with a flourish. We learn more about Loor and Alder and meet Saangi. We also learn more about Andy Mitchell….the mean kid on Second Earth who Mark and Courtney both despise.

As “Pendragon The Rivers of Zadaa” progresses Bobby is trained by Loor, Saangi and Alder to become a better fighter. He finds himself getting stronger and much more capable of handling himself in a physical situation.

And there is more.

Bobby finds he has powers that most normal humans do not have. As do the other Travelers. They heal very quickly from injuries and much more (you will have to read the book to find out more, I will not ruin it here). It is clear that as Bobby grows up and endures the hardships of being a Traveler he is becoming more powerful. It will be interesting to see how powerful he can become.

As Bobby matures, we also see a different side of Saint Dane. He is becoming openly vicious and has taken to laying some hurt on people himself (where in the past he always had others do his dirty work). He has a hot temper and Bobby can easily push his buttons. Of course Bobby pays for that, but, again, he heals quickly and is becoming more capable of returning the beatings.

To keep this short, Zadaa is……oh, I forgot, no ruining the story.

But, take this with you: The adventure on Zadaa is a hair-raising “tum-tigger” of an affair along the lines of James Rollins and Matthew Reilly.

So take a deep breath and read “Pendragon The Rivers of Zadaa”. You will enjoy the ride.

Next up in the Pendragon Book Review Marathon: Quillan.