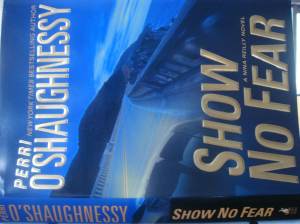 “Show No Fear” is the first Nina Reilly book in about….hmmmm, 4 years?  It has been a long wait.

I know when I went to meet Perri in 2004,  they mentioned that Nina would take a vacation and that they had been working on “Keeper of the Keys” (4 WaterTower, standalone) and “Sinister Shorts” (5 WaterTower collection of short stories with Paul Van Wagoner making an appearance in one story).

If you don’t already know, Perri is my favorite author (or authors).  Unfortunately, I finished ALL the Nina series and “Keeper” and “Sinister” before I started this blog, so this will be the first entry for Perri.  🙂

“Show No fear” is a prequel.

The story takes place as Nina is working as a paralegal in Carmel-by-the Sea for Klaus Pohlmann while attending law school at night.  In this book we meet, and gain more information on, Matt, Nina’s brother (who is more messed up than I thought), Paul Van Wagoner (a policeman in Monterey after moving from San Francisco), and Jack McIntyre (a fellow lawyer and future….oh, I won’t ruin it).

I “know” all these people and more, and I know how their lives ended up (at least thru book 11 of the series….which is now 12, I suppose).  So it was interesting to go back and learn how it all started.

The first chapter of “Show No Fear” is written in first person from the perspective of the killer who pushes someone off of the famous Big Sur Bixby Creek Bridge.  The killer thinks he/she has cleaned up the last of the complications.

Reverting back to third person…

Nina’s mother, Ginny, is in her early 50’s but has a degenerative disease that will eventually kill her.  At one point she decides that acupunture may help relieve her symptoms and visits (the somewhat shady) Dr. Wu.  He places needles in her hand, bandages her up, tells her to come back in a day or two, then he promptly goes on travel.

The needles stay in longer than they should (and should not have been put into Ginny in the first place due to her medical condition) and hurt more than anything.  Things go from bad to worse as Ginny develops an infection that costs her her hand.

To keep this blog as short as possible, here are the main plot points

1. Nina is visited by an old lover, Richard Filsen, who claims (and Nina is not sure) to be Nina’s four year old son, Bob’s, father.  Richard, an avid biker, has had a near death experience and wants to be more involved in Bob’s life (after being gone for 4 years).

2. Jack has problems and eventually breaks up with his lover, and fellow law firm lawyer, Remy (who is up for a Judgeship).

4. Paul moves into town (he and Jack are old friends).

6. Matt is totally messed up on drugs.  His friend Zinnia is a dealer.

8. Richard makes Perry a partner in his law firm.

10. Nina’s father, Harlan, is happily married now to a much younger woman, Angie.  They are expecting.

11. Dr. Wu does not have a license to practice acupunture and Paul shuts him down.

The stage is set for murder.

Two people mentioned above die, and one of the above is the killer.

I am not going to ruin the book, you will simply have to read it.

Suffice it to say, I am so glad that Nina is back!!!  Not sure how long she will continue to show up, but, I hope there is a book 13 and if there is, it brings us back to the present so we will know how the cast is doing.