Posted on February 3, 2010 by Mike Pihlman Leave a comment 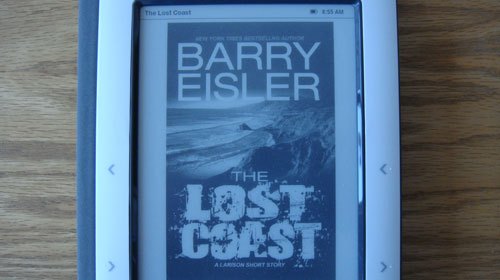 OK.  I caught Barry Eisler’s link to his blog entry titled “Paper Earthworks and Digital Tides” where he gives an outstanding synopsis and opinion on the recent Macmillan / Amazon, ah….disagreement, and what the future may hold re:  e-book versus paper publishing.

Here is the link to Barry’s blog, but, I also copied the full text below so you don’t have to jump all over the place.  Whatever appears here (when all is said and done) was approved by Barry Eisler.

Don’t be misled by the self-serving narratives Amazon and Macmillan have advanced following their recent eBooks battle. Amazon’s narrative is “We’re Pro-Consumer;” Macmillan (and paper publishers in general) counter with “We’re Anti-Monopoly.” Neither of these narratives is untrue, but neither addresses the real cause of this war.

That’s it. One side wants to improve its profits through lower costs; the other, through higher margins. Everything else is commentary, much of it misleading.

Paper publishing has been around a long time and hasn’t changed much. Think of it as a castle, surrounded by earthworks built out of the high margins publishers enjoy on hardback books. Now imagine digital as a surging tide comprised of two elements: (1) increasingly low-cost, high-quality digital book readers; and (2) lower-priced digital books. Amazon has attacked publishing’s fortifications first by introducing the Kindle, and second, by selling eBooks at a loss. Publishers can’t counter the first strategy (and even if they could, it wouldn’t matter — Apple, B&N, Sony, and plenty of other players are constantly improving and lowering the costs of digital readers). They have found a way to temporarily counter the second, by forcing Amazon to price eBooks no lower than $15, which is what the battle with Macmillan was fought over.

But it was only a battle. In the wider war, digital readers will continue to get better, cheaper, and more widely adopted. As for the price of eBooks, publishers can only control the price of the what Amazon buys from them. If you were Amazon, therefore, and publishers had stymied one of the two prongs of your strategy for speeding the transition to digital, what would you do?

That’s right. You’d speed your own transition to becoming a publisher. This has been happening anyway; all Macmillan has done is provide Amazon with an incentive to do it faster. In the coming months, therefore, expect to see Amazon announce that it’s poached some combination of editors and writers from major paper publishers. It will then publish its own eBooks at whatever price it believes will most effectively speed the transition to digital. Drive the price of eBooks low enough, and consumers’ perceptions of the value of all books will radically change. It’s this changing perception publishers fear. Consumers will buy a $17 hardback if the eBook costs $15. Charge $5 for that same eBook, and $17 for a hardback becomes an impossible sell.

Earthworks are a static defense. Publishers can do a few things to make the walls marginally higher and thicker, but that’s about it. Meanwhile, the force of the digital tide is always increasing. Eventually, a kinetic and ever stronger offense will overwhelm a static, finite defense. Either publishers don’t know this, in which case they’re deluded; or they do know it, in which case they’re just playing for time while their employees update their resumes. Either way, their position is grim. If they want to survive, they can’t just hunker down behind their crumbling walls. They need an offense.

What would that offense be? The only solution I can imagine is for the major paper publishers to stop selling digital rights to Amazon and other retailers and establish their own well branded and managed online store. It’s probably too late for them to make such a move anyway, but even if it weren’t, the chances that a media industry could do something so radical are vanishingly small. And even if they did manage to pull it off, they’d keep eBook prices high to shore up their paper profits — which is of course what they’re doing now. Piracy would increase, and Amazon would muscle in with its own line of low-cost eBooks. To make it work, publishers would have to radically lower eBook prices and cannibalize their high-margin hardback sales. I’ve never heard of a company managing such a bold move, and I don’t think a publisher will be the first to pull it off. But in a land of zero-cost distribution, with their primary competitive advantage further eroding every day, publishers need to establish their own direct link to consumers. If they don’t, they’ll offer no significant value in the changing ecosystem in which they find themselves, at which point they will become extinct.

I hope I don’t sound unsympathetic. I make a good living selling hardback books through paper publishers and I have many friends in the industry who will suffer as it changes, so on a personal level the transition to digital isn’t something I welcome wholeheartedly. But when analyzing a trend, it pays to set aside sentiment.

I used the word “extinct” above. It’s hard to avoid the imagery the word naturally conjures: dinosaurs, blinking in frightened confusion as they find themselves encircled by new, hungry-looking predators encroaching on the territory that was once exclusively theirs. Dinosaurs had famously small brains. If publishers have an advantage in this regard, they need to start exploiting it.