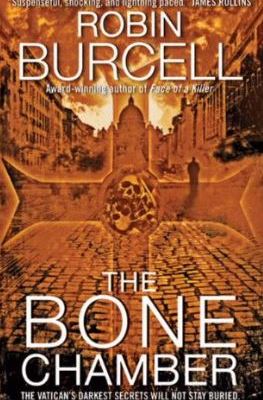 This was an ARC sent to me by Robin Burcell.  It is in stores now.

“The Bone Chamber” is the second in the Sydney Fitzpatrick series.  In a normal world, I much prefer reading series in order, and in this case I probably should have. Although some information is given on Sydney’s exploits in book 1, I still feel as though I do not know Sydney as well as I should.

That said, and if you read this blog you know that I love the Templar / Vatican / Mason, genre (ala Dan Brown, Lewis Perdue, et al).  “The Bone Chamber” adds another exciting possible solution to the hidden treasure of the Templars.  Very cool.

Special Agent Sydney Fitzpatrick is an FBI forensic artist teaching a class in D.C., and looking forward to Thanksgiving with her family in the Bay Area, when she is interrupted by her boss and Special Agent Zachary Griffin with an urgent request.

Griffin asks Sydney to recommend a good forensic anthropologist.  She does:  Dr. Natasha Gilbert.  A good friend of hers, and she lives in D.C.  How handy.

Griffin assumes Sydney will work with Natasha to develop a sketch of a dead person so they (a super secret agency called ATLAS) can identify who it is.  The body has no face (it was removed by taking off a pyramid shaped mass of skin from the face….and the fingers).

Sydney and Natasha meet.  But Natasha is unusually jumpy.  She has just returned from an archeological dig and fears she may have been cursed.  As it turns out…she was.

Because before Sydney and Natasha could start on the identification….Natasha is hit by a car and killed.

Griffin hurriedly grabs Sydney and hides her away to complete the sketch, and to keep her safe.  Once she is done, Griffin immediately knows who the person is (he knows her and so did Natasha…they were on the dig together).

From this point on, Sydney is involved if only because of her own curiosity.  She refuses to give up trying to find out who the person is and why Alessandra was murdered. Sydney’s FBI investigative skills come in handy as she quickly finds information that Griffin has not.

With this information in hand, she flies off to Italy to investigate more.  Griffin follows.

In Italy, the search for the hidden Templar treasure intensifies and the danger for all involved similarly intensifies.  We find out that the world is in danger since the treasure may also hold plagues that have been dormant for thousands of years. Fearing that these microbes could be made into biological weapons, Griffin has the safety of the world on his shoulders.  He has to succeed, but, there are others who also want to find the treasure.  And they will kill without hesitation (and cut off your face for good measure).

Do Griffin and Sydney find the secret location?  Do they survive?  Does the world survive?  You will have to read “The Bone Chamber” to find out.

I throughly enjoyed “The Bone Chamber”.  The action was intense (especially the ending), and the characters very interesting and normally flawed (Griffin is afraid of close spaces, and Sydney is afraid of the dark).   The historical intrigue and clues to the hidden treasure, although there, are easier to follow than in other books of this ilk.  Where I usually run to the Internet to find out more about a particular subject,  “The Bone Chamber” allows me to just enjoy the story.    🙂

That said, I am definitely looking forward to reading the next (and the first) in the series.  Oh, by the way, Robin Burcell is a local author living near Tracy, CA.

“Career of Evil” by Robert Galbraith 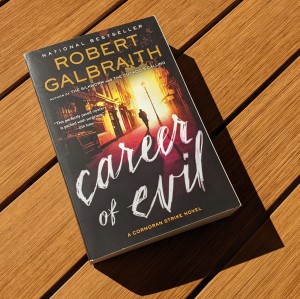 Venus and the moon. We call this phase of the moon the "Flagstaff" moon because we could see it so clearly in Flagstaff, AZ when we were on our way to Tracy, CA (from New Jersey) in 1985. 😃
Tree. 😃🚶‍♂️🚶‍♂️
New telecommuting office using the Google Pixelbook Go as my main "computer". After years of slowly moving to the cloud...I finished the process this weekend.
Early morning walk on a warm day. 🚶‍♂️🚶‍♂️🚶‍♂️