“P is for Peril” by Sue Grafton

Posted on September 22, 2014 by Mike Pihlman Leave a comment

(Kinsey is in Peril)

Longtime Santa Teresa Geriatric Doctor, Dr. Dowan Purcell, is missing and his ex-wife has hired Kinsey Millhone to find him.

As Kinsey starts her investigation, the complexity increases, as do the suspects.  Dr. Purcell has been running a local nursing home since his retirement and is embroiled in a possible fraudulent Medicare billing issue.

Some think that Dr. Purcell skipped town to avoid prosecution, others think he is dead. Either way, he has been gone for over 9 weeks but he has never been gone that long (he does have a history of leaving for shorter periods of time).

In a side plot, Kinsey is looking for another office and finds herself involved with two brothers who are her future new landlords.

Kinsey has to find the one thread that unravels Dr. Purcell’s mystery and she needs to survive the brothers.  Does she?

“P is for Peril” is one of the best Sue Grafton books.  Sparkling mystery from beginning to end.  Only one problem….it does not end, it just stops.  Arrrghhh. 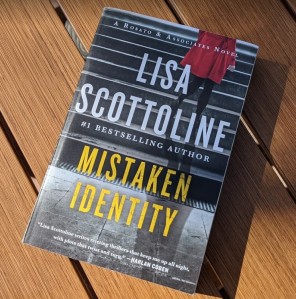 Blaze and TracyReaderDad.com are now reading "Mistaken Identity" by Lisa Scottoline. 😃📚📚 (treats are more important to Blaze for some reason) 🤣🤣
Old River a few miles from last weeks pictures. This is just off Paradise Rd. Taken with my Pixel 5. 😃
Another cool logo design by @lauranncarolecreative The letters CAROL form the main body of the logo.
New logo for ForCarol designed by @lauranncarole Thank you sooooo much, Laurann. 😃😃😃