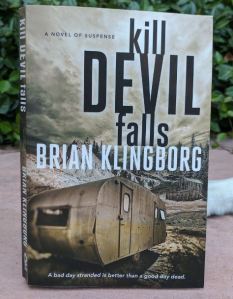 The author sent me two books, one to read and one to set free for the ForCarol.com literacy campaign.  Thank you, Brian!

Helen Morrissey is a U.S. Marshall based out of Sacramento.

She was given a task by her boss to drive to Donnersville, CA to pick up a felon, Rita Crawford, being held there.

While eating at a roadside Cafe before finishing her trip to Donnersville, Helen unknowingly crosses paths with Rita’s partner in crime, Lee Larimer, also a wanted felon. Helen does not recognize him since she was just assigned this task an hour or two ago, but, he recognizes her as a cop, and decides she must die.

Before Helen leaves the cafe, plans change and she must now go to Kill Devil Falls, CA (where the heck is that?) to pick up Rita. And, unknown to her, her car has been tampered with…..by Lee.

Lucky for her (sic).

Rita left Lee and took all the money they had stolen.  Originally from Kill Devil Falls, Rita returned there to hide the money in a place only she knew about. But after she hid the money, she was taken into custody by the Sheriff Big Ed, and his son, Deputy Sheriff Teddy.

What was supposed to be a routine prisoner pick up, Helen finds that she has to rely on all her skills, and a lot of luck, to stay alive as all hell breaks loose and the bodies start piling up.

To find out what happens, you will have to buy the book.  🙂

“Kill Devil Falls” is a fantastic read. After the first 130 pages, I simply could not put it down except to eat and…….well, you know.  Action, intrigue, and shocking twists abound as I was “virtually” in Kill Devil Falls rooting for Helen, and fearing every turn of the page.  Wow. 🙂