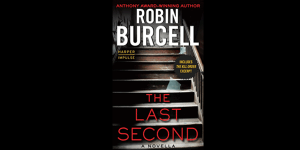 “The Last Second” is a novella written by Facebook friend, Robin Burcell.  I had forgotten how crisp and clear Robin’s writing style is free of that unknown author…..Clive something or other.  😉

Zach Griffin, special agent for the ATLAS intelligence agency, and Sydney Fitzpatrick, forensic artist for the FBI are headed to Pocito, Arizona to find out why a local police officer, Calvin Walker, who was arrested for working with the Mexican cartels, had skipped bail before the Fed’s could get to chat with him about the cartel.

Meeting with Calvin’s sister, Trish, they find out that Calvin had visited an abandoned mansion outside of town and has not been heard from since. That mansion is due to be demo’d the next day since it holds old dynamite that is very unstable.

Trish thinks Calvin was murdered and buried on the mansion’s property. She knows this is the case since Calvin’s dog, Max, is there and is not leaving.

Zach and Sydney investigate and all hell breaks loose…..

To find out what happens in this terrific short story / novella you will have to read it.  BUT….before you do make sure you eat and pee because you will not be able to leave until the end.

Note: I am catching up on short stories waiting for the “Citizen Kill” ARC to arrive. 🙂