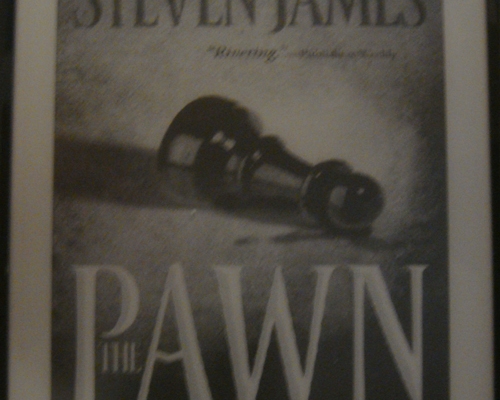 Aaron Jeffery Kincaid needs to be in control.  Aaron and his girlfriend, Jessica, made a suicide pact.  They would slash their wrists in a hot tub and spend eternity together.

Aaron slashes his wrist turning the water red with his flowing blood.  He helps Jessica slash hers and her blood flowed.  As Jessica fades from this life, Aaron emerges from the hot tub, stems the flow of blood from his wrist….and lives.

Six months after the death of his wife, FBI agent Patrick Bowers, PhD, has been called away from his seminar on strategic crime analysis to help with the latest of a string of murders in and around the Asheville, North Carolina area.  He is struggling with his emotions, but, his friend and fellow FBI agent Ralph Hawkins believes he can help in this case…as long as he feels he is able.

The Yellow Ribbon strangler has struck for, possibly, the 6th time.  In each case the murderer left a yellow ribbon tied to the victims hair…and a chess piece.  A pawn.

Once at the scene, Ralph introduces Patrick to FBI Profiler Lien-hua Jiang.  As they examine the body, we learn that Patrick is wary of profilers.  His specialty is examining all the details of the crime scenes and trying to narrow down the whereabouts or identity of the killer from the patterns that emerge from his analysis.  His ideas and techniques are not generally accepted by his peers (as is the case with most truly creative ideas).

The Illusionist was watching as the FBI agents examined the crime scene, and is happy that Patrick is on the case.  A worthy opponent.

The team of Patrick, Ralph, and Lien-hua are making progress in finding the killer but are still a few steps behind.  As more and more information becomes available, the plot widens to include….

…..but why ruin the fun?  To experience the tension and fear that I experienced in “The Pawn” you will just have to buy it and read it.  🙂

“The Pawn” is a tremendous first novel by Steven James and a superbly great thriller.  Very hard to read without gasping.  I had to turn off the Nook several times just to calm down.  I am definitely looking forward to reading “The Rook”, but, I need time to unwind first.  🙂

“Graveyard of Memories” by Barry Eisler

Going for two. Will Blaze make it? 😃
Night sky over #tracyca after a sweltering day. 🥵🥵
Blaze and TracyReaderDad.com are now reading "Graveyard of Memories" by Barry Eisler. This is a John Rain prequel.
Just dropped a book for #literacy at City Hall. ForCarol.org. Drive Safe!