“R is for Ricochet” by Sue Grafton 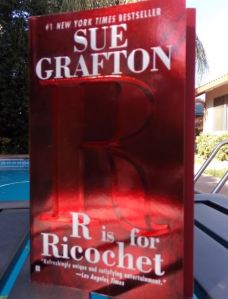 Kinsey Millhone is a PI out of the fictional town of Santa Teresa, CA (think Santa Barbara).  An ex-cop, 37 years old (this is 1987) married twice and divorced twice, she lives in a garage apartment owned by her 87 year old landlord, Henry.

Nord Lafferty calls Kinsey to ask her if she could travel down to the California Institution for Women to pick up his daughter, Reba, when she is released. Reba spent the last two years in CIW for embezzlement of funds from her old ex-boss, lover, and local real estate developer, Alan Beckwith.

Since this is an easy way to make a few bucks, Kinsey accepts the job driving down to get Reba.

Did Kinsey really think this job would be easy?  Fool her.

Kinsey’s new love interest, old friend Cheney (a detective with the Santa Teresa PD), wants Kinsey to convince Reba to spill the beans on Beck (he is laundering money on the side) so the FBI, Treasury Department, Dept of Justice, etc. can gather enough evidence to arrest Beckwith before he skips town.

Reba decides to talk to the authorities, and also, to wage a private personal war against her cheating lying ex-lover (who is also a married man).

Kinsey is caught in the middle (but….she loves it).