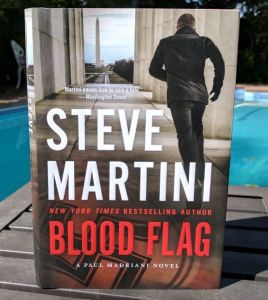 After the events of “The Enemy Inside” Paul Madriani and Harry Hines have million’s of dollars to help boost their small law practice near the Coronado Hotel in San Diego (I have pictures of their location somewhere that I am still trying to find).

Sofia is a new paralegal working to gather enough money to finish law school.  She is 26, very bright, and an excellent multi-tasker….on her phone constantly during client meetings. Much to the amazement of Paul, she manages quite well:

“The girl must have learned multitasking in the womb. Quiz her after the client meeting, she’ll be able to repeat almost verbatim everything Brauer told us……”

Emma Brauer is a new client under suspicion of murdering her father, 89 year old Robert Brauer, a WWII veteran.

Months before he died, Robert received a small box in the mail that contained a key and a name. Robert was frightened, then his house was trashed…adding to his fear.

Emma is arrested for his murder and Sophia goes to her house to get her dog, Dingus. Unfortunately, Sophia never made it back to the office….she was murdered.

Now everyone is in danger.

Who murdered Sophia?  Why was she murdered?  Do Paul, Harry, and Henry find out….or…..?

You will have to read the book to find out.

“Blood Flag” is a typically terrific novel by Steve Martini. He takes several years between novels, but, as soon as one comes out I make sure I read it.  He is a master….THE master…..of thrillers.  And “Blood flag” is no exception.  A shocking twist at the end will blow your mind.  The “Blood Flag” (Blutfahne) refers to a bloody flag (missing for 70 years) that was part of the first uprising of a homeless, broken down artist, who became the world’s most horrific personality: Hitler.

Madriani Law Offices and Area in San Diego (I went there on business in 2002, and decided to find Paul and Harry.  😉