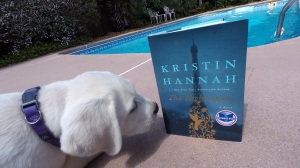 “The Nighingale” is a classic: A brilliantly written book that describes the lives of two sisters during the Nazis occupation of France. Vianne and Isabelle Mauric couldn’t be more different in temperament and how they chose to confront conflict yet both ended up hero’s in their own way.

Julian Mauric was a strong man who was broken during World War I.  He came back home “different”. When his wife died he all but abandoned his two daughters.

Vianne met Antoine when she was only 16 years old. They fell in love, had a baby, and settled down in the Mauric family home in Carriveau, France.

Isabelle was placed in several boarding schools each of which she either left or was kicked out of.  Isabella was “impetuous” and did not suffer fools, or rules, lightly.

When, in 1939, the Nazis were believed to be on the verge of invading France, Vianne and Isabelle were left behind as the young men of France, Antoine included, went to the front to keep the Germans at bay.

They were not successful.

Life was different under Nazis rule. Curfews were put in place, food was rationed, and Nazis billeted in French homes, including the Mauric home. Eventually, the Jews were identified and shipped off to concentration camps. Executions became commonplace and fear ruled.

While Vianne chose to live with her head down to keep her daughter and herself safe, Isabelle fought back eventually leaving the family home and joining the resistance.

“The Nightingale” fast forwards to 1995 several times as an old woman living in Oregon is moving out of her home of 50 years. She is dying from cancer and is dumbfounded by aging and what it has done to her once strong body. We know this woman has a son who takes very good care of her, Julian, and that she has been invited to a ceremony in France.

We just don’t know, until the end of the book, who this old woman is.

“The Nighingale” is truly an outstanding book. But it is not for the faint of heart, as the brutality of war, and life under Nazis rule, is vividly depicted.

Book Review: “Face of a Killer” by Robin Burcell

Short Story Summary: “The Elephant in the Room” by Wendy Corsi Staub

“The Gray Ghost” by Clive Cussler and Robin Burcell

“City of Sharks” by Kelli Stanley

“The Romanov Ransom” by Clive Cussler and Robin Burcell

“The Last Second” by Robin Burcell

“The Wolves of Midwinter” by Anne Rice

“The Wolf Gift” by Anne Rice

“City of Ghosts” by Kelli Stanley